Travel Biblical invites you to embark on the Journey in to Christian heritage, Turkey: the Lost Land of the Bible! From Genesis to Revelation. Turkey is the undiscovered jewel of Biblical history. Throughout the ages it has been a tapestry of cultures and civilizations woven together by the indelible finger of God. The sacred destinations of Turkey will challenge you, your friends, and your church to renew your “first love”. This tour package will give you possibility to explore biblical sites of Turkey as well as visiting all major cultural archeological and tourist significance.

Arrival in Istanbul, the city that bridges two continents, “Europe” and “Asia”. You will be met at the airport, assistance and transfer to the hotel.

Tour of “Sultan Ahmet Center”, the heart of the “Old City” from where the Byzantine and Ottoman Empires were ruled Hagia Sophia, one of the greatest marvels of architecture, constructed as a basilica in the 6th century by Emperor Justinian Blue Mosque, facing Hagia Sophia, famous with its blue Iznik tiles and unique with 6 minarets, built in the name of Sultan Ahmet. Hippodrome, center of sportive (chariot races, athletics) events and political activities of the old city. Obelisk of Theodosius, Serpentine Column, and German Fountain of Wilhelm II are the monuments decorating Hippodrome Grand Covered Bazaar, Most attractive shopping center and biggest “souk” in the world. Topkapi Palace, Imperial residence of Ottoman Sultans exhibiting Chinese porcelain, weapons, calligraphy, section.
(B,L)

Take flight early in the morning to Izmir airport Ephesus, one of the “Seven Churches of Revelation”. Visit to St. John Basilica and the, Last abode of Virgin Mary at Mount Solmissos. Visit to the old Greco-Roman city of Ephesus, most important of the “Seven Churches of Asia Minor”, where St. John brought Mary in fulfillment of his pledge to Jesus to protect her, she is believed to have taken into heaven. After lunch, continue to Laodicea a Crossroads of the ancient world. Overnight stay in Pamukkale. (L, D)

In the morning, we visit the ancient city of Hierapolis home of Philip the Evangelist. Have a break at the calcium terraces of Pamukkale later on proceed to Philadelphia. Philadelphia (Alasehir), the youngest of the “Seven Churches of Revelation”, visiting the still standing remains of an early church and the city walls Lunch on the way. In the afternoon visit, ancient city and ruins of the famous church of Sardis the ancient Lydian capital. Later on the remains of the church of Thyatira than drive to Pergamon where we overnight stay. (B, L D)

Departure after breakfast for Pergamon (Bergama), the place where, wrote St. John to the church of Pergamon, “Satan’s throne is sited. Visit the Church of Pergamon, the red-court, Acropolis, after lunch; we drive to Smyrna (Izmir), recipient of a letter from St Paul praising the early believers for their faithfulness. A short tour of the city at the end of the tour, transfer to Izmir Airport for the flight to Cappadocia On arrival to Cappadocia Transfer to your hotel. Cappadocia for Overnight Stay. (B, L)

After breakfast we will enjoy the magical Cappadocia. Our first real encounter with Cappadocia almost Martian landscape is in the Dervent valley. We visit Pasabag “fairy chimneys”, where the voice of the wind harmonizes with songs of the fairies. From here we pause at Avanos center of terracotta art. After lunch we visit the famous Goreme Open Air Museum to see the best examples of Byzantine art in Cappadocia. We complete the tour with a visit to the Uchisar Rock-Castle, giving you a panoramic view of the valleys of Cappadocia. Overnight in Cappadocia. (B, L)

Depart from your hotel to visit Red valley and explore the famous rock- cut churches and hike 5 km through the Gulludere valley. Then visit Cavusin village. Old Cavusin was abandoned several decades ago due to avalanches. The current village of Cavusin is located on the road. Old Cavusin, with its rock-cut dwellings and stone houses, had several hermitages. After lunch drive to the Pigeon Valley. In the afternoon visit Underground City, where early Christians lived in fear and faith. The houses in the village are constructed around the nearly one hundred tunnels of the underground city, which is one of the most interesting underground settlements in Cappadocia. The underground city was originally carved out as eight floors; however four floors are available to visit. In wartime about 5000 people can refuge in. The tunnels are still used today as storage areas, stables, and cellars. On the way back visit the natural castles at Ortahisar. (In the evening Turkish Night as optional).(B, L)

Flight to Istanbul Continue with the Istanbul extension or transfer to the airport for flight back to Istanbul Free afternoon. (B)

Free time until transfer to the airport for the flight back home.
You may add on Istanbul extension please contact with us..

P.S: For group requirements, other languages are available on demand.
* Except Departure dates tour also operated privately according to the requested dates. Dates are flexible. Please contact us.. 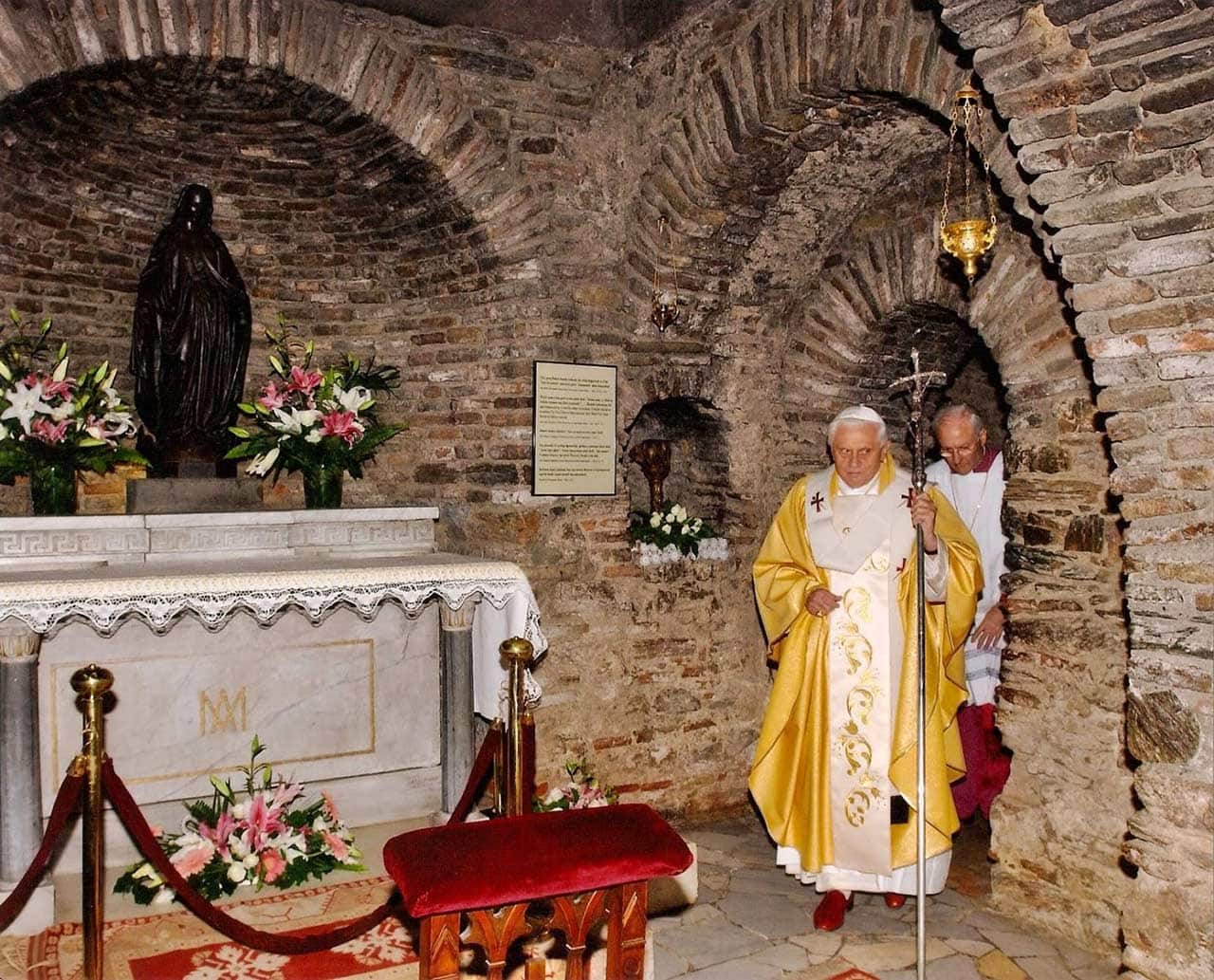 Travel biblical has been dedicated to providing quality Christian travel pilgrimage programs to the holy lands of Turkey and Greece with affordable price. Our tours are handled by qualified, friendly directors, safe and courteous drivers, and knowledgeable local guides who are experts on their regions.